What is the International Astronautical Congress (IAC)? It is a forum for all people concerned with space to share ideas. Media, education, government, companies and entrepreneurs make up the 2000 stakeholders present.

Plenary sessions in large auditoriums discuss high level updates of the space industry, while technical sessions in small rooms discuss updates on research into specific low-level technical problems. The exhibition hall contains booths to showcase business developments, with the view to forge new ones. There is so much parallel information on offer that it is impossible for one person to experience it all – the IAC is a unique experience for each person. I am sharing my personal experience on the first day. 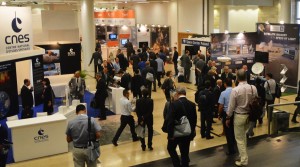 Part of the exhibition hall. On the left the French Space Agency CNES. In the background the Polish and  Dutch pavillon, behind the pillar the South African Space Agency and SpaceX / Credits – K. Kanawka, Blue Dot Solutions

It is impossible to discuss the Jerusalem IAC experience without mentioning the security situation. While there is a lot of tension and conflict ongoing, it is peaceful and calm in the region of the conference.

The IAC was inaugurated with an opening ceremony using music, dance and video to discuss the theme of this year’s IAC – “Space – the gateway for mankind’s future”. Some prominent members of Israel’s space industry communicated what space means for Israel, and what Israel means for space. Ofir Akunis, Minister for science and technology outlined his directive to strengthen ties between ISA and other space agencies, and that a microsat built by Israeli high school students has been launched into space. Nir Barkat, Mayor of Jerusalem, outlined that Israel wants peaceful use of space and is open for partnerships. Rafi Maor, Chairman of Aerospace Industries, mentioned that Israel was fortuitously founded in the only region suitable for launching spacecraft, and that Israel developed the indigenous capability to build and launch satellites on a small budget. The ceremony was concluded with the presentation of a plaque to Kiyoshi Higuchi, Head of IAF with heat shield patches flown on the Orion test missions. 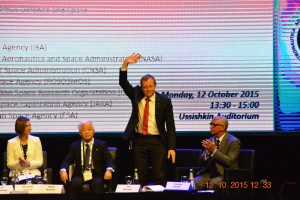 I interviewed Bill Gerstenmair, NASA Associated Administrator of Human Explorations and Operations. I asked questions on the Orion program, the first manned deep space vehicle since the 1970’s, and how it fits into the scope of NASA’s journey to Mars. His answers will be published after the conference concludes.

Plenary 1, Heads of Spaces Agencies, was concerned with communicating updates and future directions of NASA, ESA, Roscosmos, JAXA, ISA, ISRO and CNSA. Some of the key updates include:

Responding to a question from the audience, the heads of space agencies outlined what they would consider a big achievement for their respective organisation by 2030:

Of particular interest to myself was learning about the progress of the space industry in China. My impression was that things are moving relatively fast across a number of activities. Their current focus is development of new generation launch vehicles which are environmentally friendly and application of satellite technologies for socio-economic development. Some of the future target’s include:

What I am really looking forward to is Plenary 7, “The Moon – a continent and a gateway for our future” as I have a technical interest in 3D Printing regolith to construct structures, machines and process resources for space exploration.